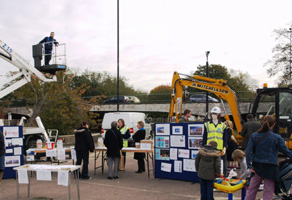 Construction plant always holds a fascination for youngsters, which helps explain why Costain's stand was the place to be at Newbury's annual Sunday Funday.

Three staff from the team constructing the Newbury Parkway development in the Berkshire town - Andy Smith, Sharon Lawton and Gareth Buisson - gave up their time to give the Company a presence at the event.

They were needed, as a steady stream of visitors (about 1,000 by the end of the day) poured over the exhibit.

Star of the show, said Liaison Manager Andy Smith, was the digger. "For most of the day we had a queue of about 30 youngsters waiting to sit in it and have their picture taken for the family album.

"It was just a pity they discovered the horn still worked even when the digger was immobilised!"

A Bob the Builder colouring table and two sand pits were also very popular with the younger children. The team also dished out hundreds of lollypops to the children who visited the stand (including quite a few that were nearer pension age than school age!)

"The team also raised over £100 for the town's fire brigade charitable efforts, by running a Hidden Treasure competition where entrants had to guess the weight of a sand-filled jar with a prize hidden inside. The money was handed over to station commander Matt Frayne after the day was over," said Andy.