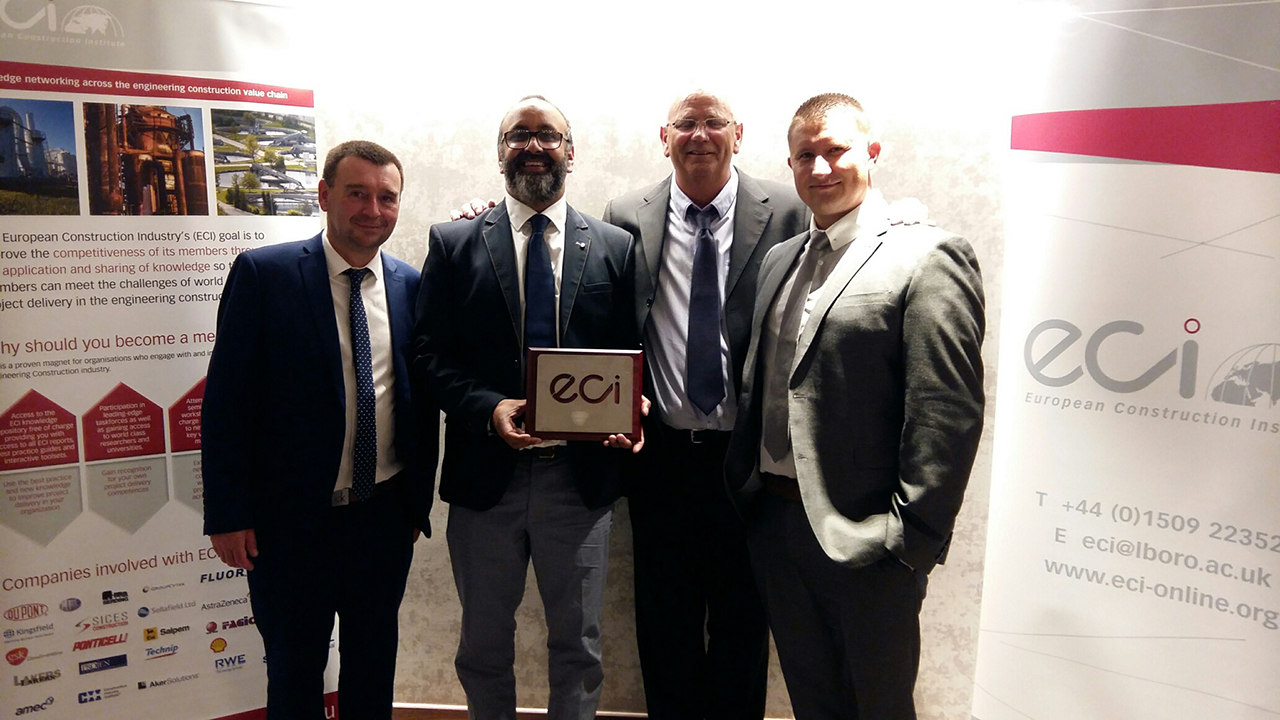 Costain, together with the customer, United Utilities, and their joint venture partners, Galliford Try and Atkins (GCA), won the prestigious ECI Project of the Year Award for the £200 million Liverpool Wastewater Treatment Works.

Project of the Year

The ECI Project of the Year Award acknowledges leading engineering and construction projects and project teams, which have achieved significant success through effective management and delivery approaches. Awards are considered for projects demonstrating excellence, regardless of size.

United Utilities’ Liverpool Wastewater Treatment Works is one of the of the largest AMP5 projects in the UK. The upgrade and extension in the redundant Wellington Dock next to the existing waste water treatment works in the neighbouring Sandon Dock includes a new secondary treatment process comprising a 16-cell, two-storey, 21m-high sequencing batch reactor (SBR) plant - the UK’s first multi-storey CASS (Cyclic Activated Sludge System) SBR.

Now fully operational, the treatment works is capable of processing 4,750 litres per second of wastewater, keeping the River Mersey clean for generations to come.

Commenting on the winning project team, the ECI judges said: “Such upgrades and expansion infrastructure projects have unique complexities and challenges. The judging panel was particularly impressed at the level of collaboration and the adoption of a one-team approach, precision design, and value engineering resulted in an ahead of schedule and below budget achievement and importantly to the client’s specifications. The application of the ACTIVE Principles was the cornerstone to the success.”

Manjit Gill, Senior Project Manager at Liverpool, said: “We are delighted to walk away with the ECI’s Project of the Year Award, giving due recognition to a fantastic project. We were involved from the concept phase, working with the client to deliver a robust solution. The key to our success was the level of collaboration with a “One Team” ethos between the Joint Venture partners of Costain, Galliford Try, Atkins and the client’s integrated project team. From the outset we developed the project on this basis to ultimately deliver a plant that meets the client’s requirement for resilience and efficiency. Everyone who worked on the Liverpool programme should be very proud of their contribution in receiving this accolade.”

Young Professional of the year

David joined the industry as an apprentice straight out of school on the first of its kind Project Controls apprenticeship in 2007. Since then, David has gained a BTEC in Construction, a NVQ level 3 in Project Controls, followed by a First Class BA Honours in Business Management, excelling in his career to become a Senior Planning Engineer.

David has also played in a big role in the wider community, which is a key criterial for the ECI, as well as presenting at various events and encouraging the next generation of apprentices through schools and colleges as well as mentoring the Costain Project Controls Apprentices.

“David has built multi-discipline knowledge and knows how to apply it to deliver quality schedules which people have confidence in and trust. Dave has a passion for wanting to help young talent to develop and has been involved with interviewing and mentoring graduates and apprentices at Costain, and offering help and advice to structure their development and career paths,” the ECI said.

This year, the scoring for the Young Professional Award saw three nominees separated by two points. So aside from the overall winner, the ECI decided to present Special Commendations to the other two people.

One of the Special Commendations went to Ioanna Papanikolaou, a Site Engineer working on the Thames Tideway Project. While still at university, Ioanna cut her teeth in Costain’s Highways and Power sectors before starting full time on the London power Tunnels project. Since then, Ioanna has signed up for a PhD at Cambridge University to focus on materials and innovative products.

“Ioanna has already built a track record of her achievements and is building a name for herself in the industry. Ioanna is a person to watch out for in the future,” the ECI said.

The awards took place at the Marriott Hotel, Heathrow, in west London recently. The ECI is a pan-European network of organisations focussed on delivering construction excellence, improving the competitiveness of its members through shared knowledge and applying best practice.