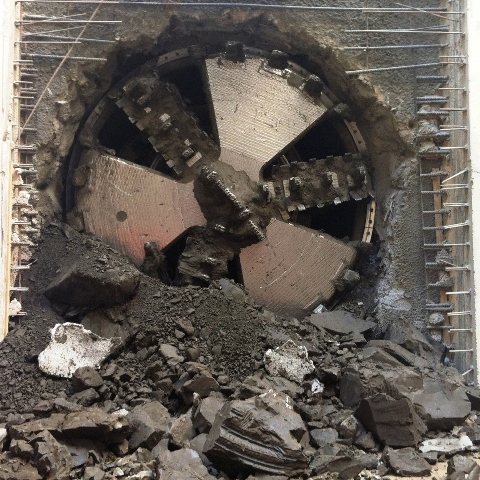 The team working on the London Power Tunnels for National Grid is celebrating the performance of Evelyn, one of two large Tunnel Boring Machines (TBMs), after 'she' set a new project record for advancing 55.2 metres in a single 12-hour shift.

Costain is involved in the construction of 32 kilometres of 4.0mID and 3.0mID tunnels, 14 shafts, and four connecting tunnels with associated underground chambers. The tunnels are being driven by a 4.0mID Herrenknecht earth pressure balance (EPB) TBM and a 3.0mID a Caterpillar MP139SE dual mode TBM from Canada, nicknamed Cleopatra and Evelyn by local schoolchildren.

Evelyn was delivered to the project in November 2011 and launched from Willesden sub-station in March 2012 to dig 19km of the 32 km tunnels. She is now on the final stretch with approximately 1,800 metres left to construct.

In her journey so far, Evelyn has arrived at seven shafts and one underground chamber, and is due to arrive at the last shaft in early March. The tunnels are part of a £250 million project to provide an easy to maintain underground electricity superhighway, and to ensure London has sufficient transmission infrastructure to support future energy demand.

“Evelyn’s performance and reliability has been excellent, with availability continuously in the high 90 percentiles. This is testament to the Costain team that managed the procurement and build process of her, and to the engineers and operatives that manage her on a day to day basis,” said Angus Mackenzie, the Tunnel Agent working on the project.