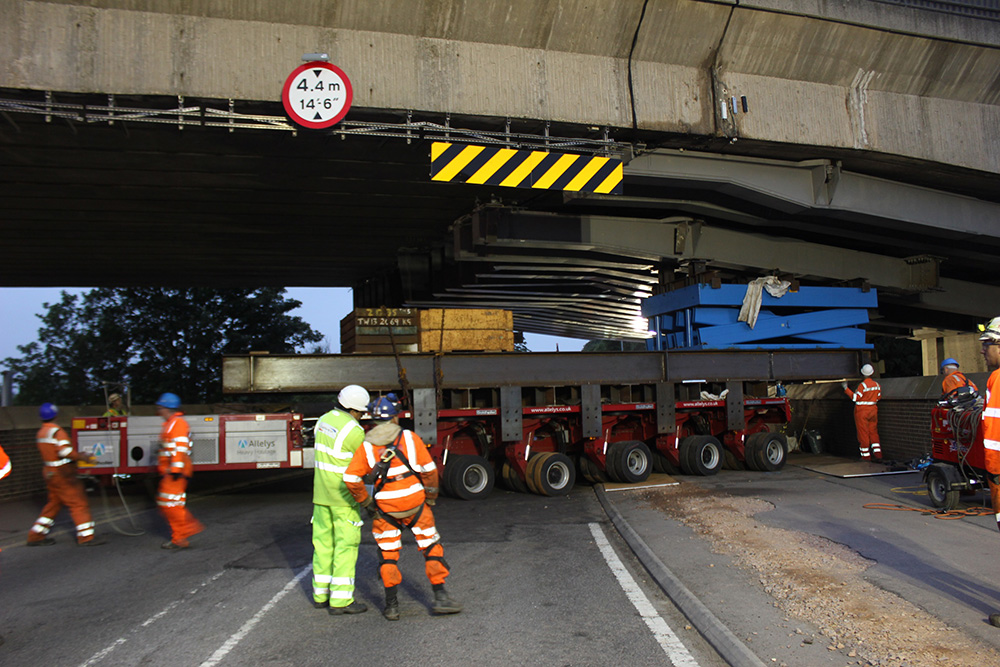 The Costain team working on the strengthening of the A14 Huntingdon Railway Viaduct has successfully delivered the project ahead of schedule while ensuring there were no disruptions to the strategically important A14 or the East Coast Main Line railway.

Located in Cambridgeshire, the A14 Huntingdon Railway Viaduct carries 42,000 vehicles a day over the East Coast Main Line and an existing road bridge. Whilst the existing structure was deemed to be safe, its ongoing deterioration - in particular to the half joints on the central span of the bridge - risked, without intervention, being left incapable of carrying the type and volume of traffic that uses the A14.

Strengthening work began in June 2013 and was completed in October 2013, although the installation of ancillary equipment continued until March 2014. The project included replacing 400 tonnes of steel beams which span both the East Coast Main Line and an existing road bridge. The 38 steel beams were replaced using Self Propelled Modular Transporters and, following successful equipment trials in Darlington, a 47 tonne forklift truck imported from Denmark.

To get the job done, the team had to be innovative in how they worked. One of the biggest innovations included using a forklift truck, a piece of machinery normally associated with the lifting of heavy containers at ferry ports, to raise the beams into position.

“The initial plan was to use a crash deck over the railway to jack the beams into place, but this would have required two 72-hour possessions of the East Coast Main Line, in both Christmas 2012 and Christmas 2013, to install and remove the crash deck. By using the forklift, we completed the work by taking overnight possession of the railway which negated the need for a blockade of the railway during the Christmas periods, and the disruption this would have caused,” said Sean Ellison, Senior Site Agent for the Scheme.

As well as the strengthening works, the £4.2 million scheme included changes to local road layout and upgrades to improve the local signage and lighting. The new strengthening works have safeguarded the bridge for the foreseeable future. However, due to the depth of the sections required to support the loads carried by the A14, there are now permanent height restrictions on the B1514 into Huntingdon, the local road that runs under the A14.

The works were completed two weeks early despite operating in a severely restricted working environment. The refurbished bridge and the surrounding area were formally handed back defect free on 13 March 2014. In recognition of the team’s performance, the project won a Considerate Constructors Bronze Award following two Considerate Constructor Scheme audit scores of 41.

“The project was very close to key facilities including a major school, a hospital, emergency services headquarters and a railway station, but by proactively engaging with stakeholders early on in the scheme it was possible to complete the works with minimal disruption to their operations,” said Sean.

Sean added: “We’re absolutely delighted to have completed the project ahead of schedule, which was down to a combination of innovative and collaborative working. These two factors enabled the technically complex project to be delivered with an impeccable safety record, ahead of schedule and within the customer’s budget.”