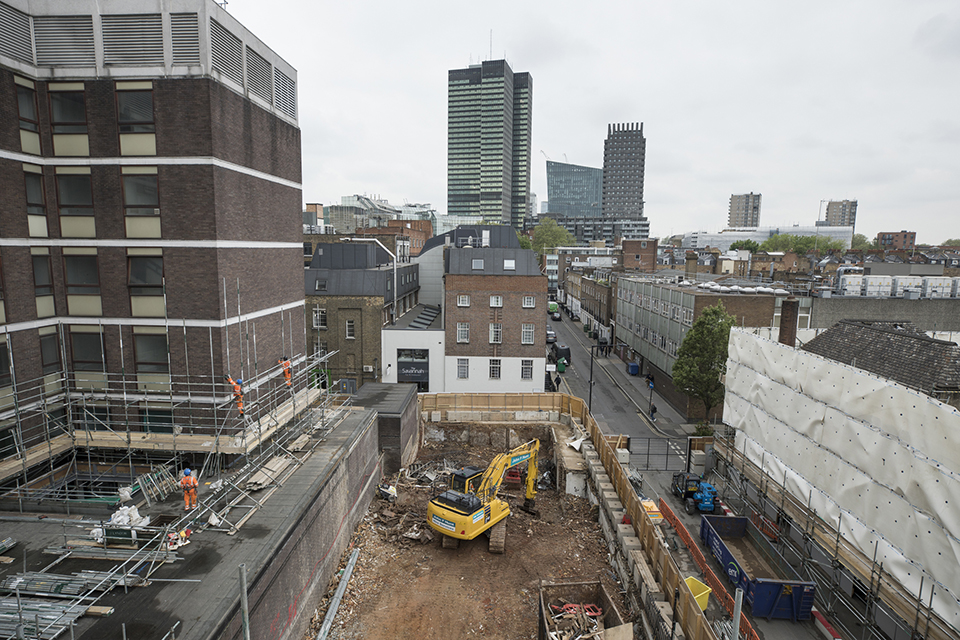 HS2 has released a set of new images showing progress at London Euston where the team this week completed the demolition of the former BHS warehouse on Hampstead Road, close to the new station’s proposed Camden Town entrance.

The images highlight the scale of the new mega-station, whose 400 metre platforms and concourse will be built adjacent to the existing station, doubling capacity and improving journeys for millions of people.

The former BHS warehouse was once the centre of the department store’s London distribution network, with the building providing office space above the warehouse, loading bays and basement.

Since the closure of the warehouse, the 5,000 square foot building had been temporarily occupied by UCL’s Bartlett School of Architecture and used by HS2’s contractors as office space.

The building, made up of two separate three and five storey concrete-framed structures, was demolished over 8 months, by a Costain and Skanska team (CSjv) and specialist subcontractors John F Hunt.

A top-down demolition technique was used, with machines lifted onto the top of the buildings and protective screening installed around the outside to limit noise and dust. During the work, more than 35,000 tonnes of concrete was crushed and reused on site. With the demolition complete, the team are now working to finish the clearance of the site, ready for handover to the station construction teams.

Across the UK, more than 9,000 jobs are now supported by HS2 both directly and in the supply chain, delivering essential early works, including demolition, utilities, ecological works and the project’s pioneering archaeological programme.

“This week’s milestone is the latest evidence of the progress we are making across London. With our fascinating archaeological programme in full swing and more than two thirds of demolitions now complete, I’d like to thank all those involved in the project for their hard work and dedication.”

"Costain and Skanska have successfully completed yet another major building demolition as part of our huge HS2 enabling works programme. With more than 1,500 people now at work across the capital, we are proud to be part of what will be, the UK’s biggest infrastructure project.”

Across the capital, more than two thirds of demolitions have now been completed, with utility work and the creation of new wildlife habitats as part of HS2’s ‘green corridor’ project, also well underway.

Once complete, the station, could, for the first time, include a new entrance facing north towards Camden Town and west towards Hampstead Road and the shops and restaurants of Drummond Street. In total, the arrival of HS2 will more than double the number of seats out of the station during peak hours.