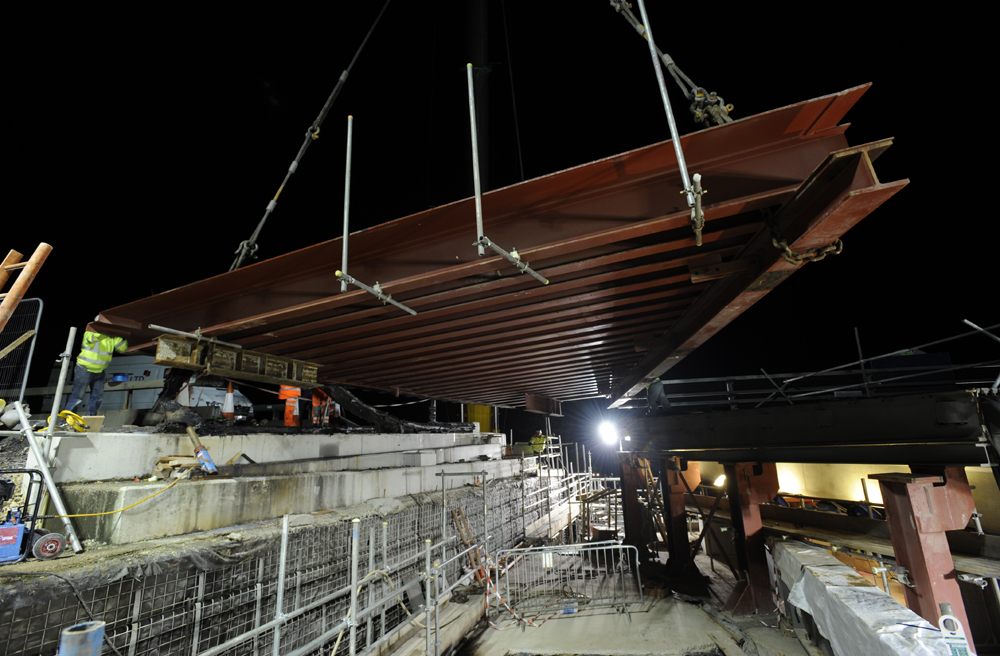 Two years of planning came to fruition at the weekend, as the Costain team on the Wolvercote viaduct project carried out one of the largest bridge slides ever completed in the UK.

Over the course of 19 hours, eight huge hydraulic rams pushed a 5,000-tonne, 250-metre-long bridge deck 16 metres horizontally from where it had been constructed on temporary piers alongside the A34 near Oxford, to become the new southbound carriageway of the viaduct.

The new structure replaces its 1960s predecessor that had suffered badly from water penetration. The Costain-built replacement has been designed to have a 120-year lifespan.
&nbsp;
"It was a long weekend, but a fantastic achievement," says Project Manager, Darren Dobson.

Proceedings began with the closure of the southbound carriageway to traffic at 7pm on Saturday. The expansion joints and components attaching the deck to its temporary piers were removed and the entire deck lifted 20mm for the sideways slide.

"We slid it 16 metres to its new, online position and set it back down on its new crossheads. It was a perfect fit" says Dobson.

The expansion joints were reconnected, the bearings fixed and the road was reopened to traffic at 3.15pm on Sunday. This was two hours later than planned, due to the general complexity of the job plus individual problems such as re-siting some of the hydraulic rams and the failure of a power pack near the end of the procedure.

Despite the overrun, "We only received two complaints and those were massively outweighed by the congratulations from all quarters," says Dobson. "I think everyone understands what we've achieved in terms of construction techniques."

The temporary piers atop which the southbound deck was built will now be demolished, the ground landscaped and the project completed by June - three months ahead of schedule.

•&nbsp;The only known larger slide in the UK occurred in 1996 when a 5,500-tonne, 400-metre deck was moved. However, that procedure took an entire 48 hours and involved a smaller distance to slide.