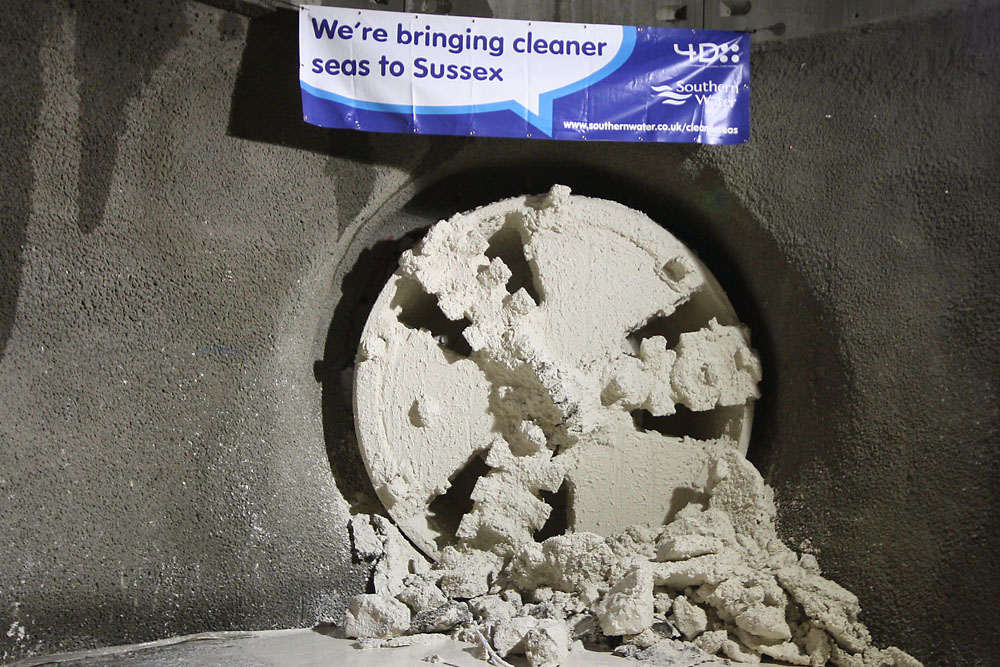 A significant milestone has been reached on the £300million Cleaner Seas for Sussex scheme, being delivered on behalf of Southern Water by Brighton and Hove 4Delivery Ltd, a Costain joint venture.

'Alice', one of two 2.4 metre diameter&nbsp;tunnel boring machines (TBMs), broke through at Marine Drive Pumping Station, completing the first of three drives to link the existing Victorian sewer system to a new Wastewater Treatment Works being constructed at Peacehaven as part of the scheme.&nbsp; A total of 11 kilometres of tunnels are being constructed through the chalk at between 8 and 42 metres underground.&nbsp;

Julian Smith, Southern Water's Project Manager, said: "'Alice' has been working out-of-sight with our miners since June to assist with the construction of the new sewer tunnel. Walking along the tunnel she has created really gives you an idea of the sheer scale of this project.

"A great cheer went up at the reception shaft when her teeth appeared through the concrete wall. It was truly a celebratory moment for the engineers, miners and the management team alike."

School children from St Margaret's Primary School in Rottingdean chose the name 'Alice', after 'Alice in Wonderland'. It is believed that the inspiration for the story came from a tunnel linking a garden to the seafront at Brighton. The children attended the launch of the TBM at Ovingdean in June, when she started her 1700 metre journey to Marine Drive Pumping Station.

4Delivery Infrastructure Project Manager for the scheme, Craig Reade, said: "This is a fantastic achievement by the team. The first tunnel breakthrough is a significant milestone in this complex project and I am pleased to share with our client the recognition of the site team's hard work and effort since the start of the project over a year ago."

'Alice' will now be returned to Ovingdean where she will be re-launched in early December to construct a second 3.6 km tunnel to Portobello Pumping Station. A second machine, 'Hollyblue', is currently 1,500 metres into a 3,732 metre tunnel drive from the treatment works site to Portobello Pumping Station, to complete the connection between the existing sewer network and the new treatment works.

Shortly before the breakthrough, Howard Goodbourn, interim CEO of Southern Water, visited the tunnel drive. Howard has become a regular visitor to the project since his appointment, and further to a previous visit to the Wastewater Treatment Works he was keen to witness the efforts being employed to deliver the significant tunnelling works associated with the new scheme. Taking note of the requirement not to adversely impact on production rates at this key stage of the tunnelling works, Howard gave up his Saturday morning to visit the tunnel during one of the planned maintenance shifts. Commenting on his visit he stated that he was 'very impressed' with the ongoing works, and that this latest visit reinforces his positive view of the project.

The scheme is being built to treat the 95million litres of wastewater generated each day by the residents of Peacehaven, Telscombe Cliffs, Ovingdean, Rottingdean, Saltdean and Brighton and Hove, so that this area meets the latest European environmental standards on wastewater treatment.

Further information on the scheme can be found at: www.southernwater.co.uk/cleanerseas.