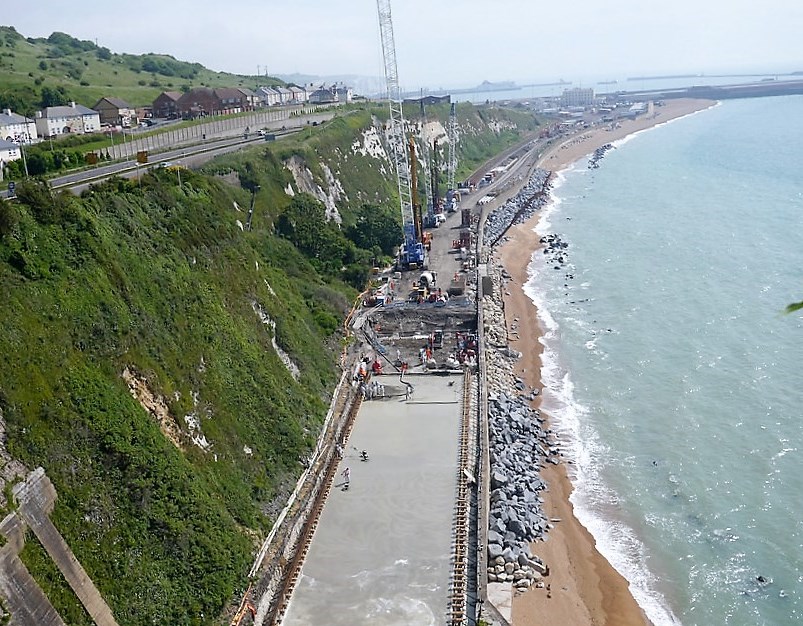 Trains are running on the Dover-Folkestone line again after Costain completed in nine months a job that would normally take two years.

A new, 235-metre concrete viaduct with a design lifespan of 120 years has been built to replace a Victorian predecessor that threatened to collapse.

The railway line, which runs along the coast, was closed on Christmas Eve last year after a section of the sea wall protecting it suddenly dropped 1.5 metres during a storm and large sinkholes opened up beside the tracks.

As part of its work on the Kent Multi-Functional framework (MFF), Costain was called in to execute emergency works.

Staff carried out a reconnaissance of the track immediately and mobilisation began on Boxing Day.

The job started with emergency works, with rock armour placed against the sea wall and sheet piling driven into the shingle to retain the rock, said Framework Director Dave Johnson. “Within a few weeks, however, it became apparent that more than just a patch-up job was necessary.”

The preferred option for Network Rail, was a piled concrete raft to act independently of the existing sea wall, enabling a faster reinstatement of the railway operations.  The previous viaduct and sea wall acted together to form the support for the rail bed. Following the original timber structure rotting and the sea wall being undermined by tidal action, the rail bed failed.

The project got off to a fast start with political assistance from Dover and Deal MP, Charlie Elphicke enabling Network Rail to compress the normal administrative procedures that precede work getting underway.

Then it was on to the heavy construction. “The new viaduct has 132, 900mm-diameter piles driven 30 metres into the ground,” said Project Director Charly Clark. “We then laid the 235-metre concrete viaduct slab, with the various ancillary works, such as re-laying the railway track, following on.

Among challenges facing Charly and his team were the presence of so many heavy piling rigs and cranes on the remains of the old track and the fear that if the loading on the adjacent sea wall became too great, the rigs could topple.

And the long, narrow nature of the worksite meant that deliveries of material had to thread their way through heavy plant and equipment.

“Costain provided a complete service to Network Rail from rapid emergency response through collaborative solution development and design, together with a sustainable build solution,” commented Dave.

Senior Network Rail officials offered plaudits for the line’s rapid return to service. “This really is a blueprint for taking forward projects of this nature,” said director of route asset management Alan Ross. “It really demonstrates what can be done when everybody pulls together, everybody has a set of objectives that everybody signs up to and everybody plays their part.”

His comments were echoed by Network Rail’s project lead, Steve Kilby: “This has been the number one project of my career, primarily because of the people – this has been the most collaborative project I’ve ever worked on.”

Following the official opening on September 5, members of the Costain team took a train ride over their handiwork. That work will continue, with more than 100,000 tonnes of rock still to be placed on the beach and a new footbridge to be lifted into place.