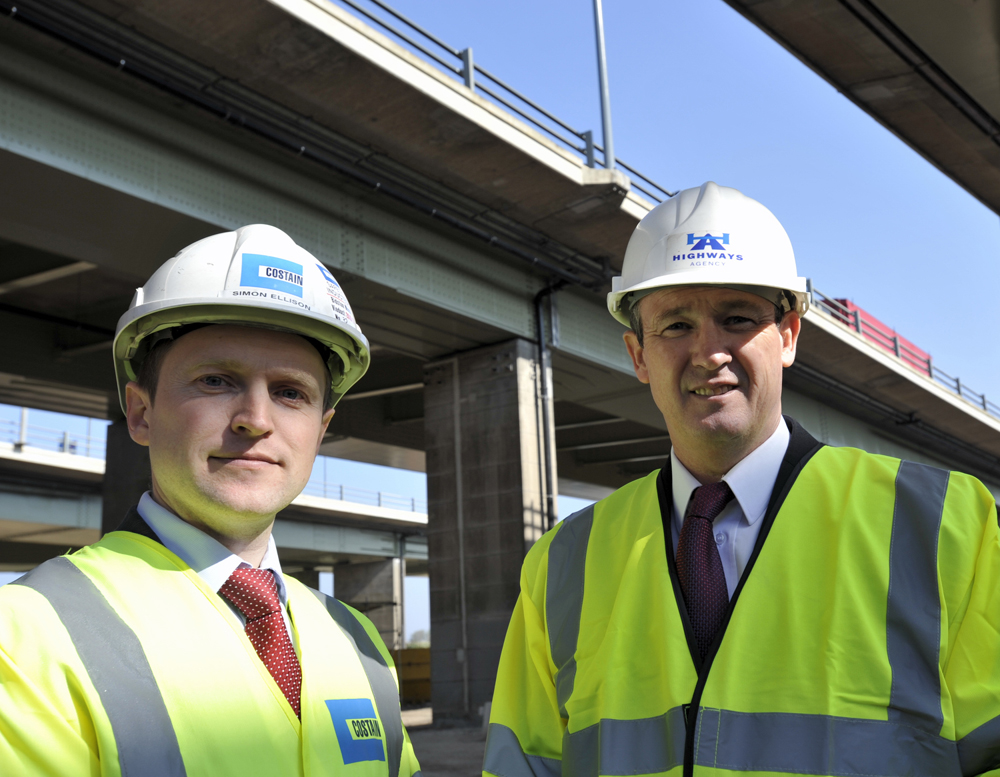 Costain has completed the strengthening and refurbishment of the 730-metre long Bidston Moss Viaduct on time and under budget.

The project, which entailed strengthening 3 km of box girder structure dating back to 1969, required 1.25 million man hours and was achieved without a single lost time accident.

Located on the Wirral in North West England, the Bidston Moss Viaduct carries the M53 over local roads and a railway line towards the Kingsway Tunnel and Liverpool. Over 50,000 vehicles use the viaduct on a daily basis, including 3,000 heavy goods vehicles.

Weight restrictions were imposed on the viaduct in 2005 as a safety precaution. In order for it to remain open and viable, the structure’s weaknesses had to be addressed by 31 December 2011 or it risked being closed to HGVs. The scheme was funded by the Highways Agency, the Department for Transport, Wirral Council and Merseyside Integrated Transport Authority (Mersey Travel).

Strengthening work started in April 2010 and was completed in September 2011, three months earlier than planned, which allowed the restrictions on HGVs to be removed.  The refurbished bridge was formally handed back to its three owners defect free on Wednesday 28th March 2012.

Welcoming the completed project, Roads Minister, Mike Penning said: “The Bidston Moss Viaduct is on a major route for the Wirral and into Liverpool, so we’re delighted that the strengthening work was completed three months earlier than planned – providing additional lanes for heavy goods vehicles. This early completion also helped the Government save £1.5m.”

Mike Penning added: “Heavy goods vehicles can now travel in both lanes, helping to ease congestion for everyone who uses that section of motorway. This can only be good news for the regular commuters and those who depend on good transport links for transporting goods and services in the region.”

As well as the strengthening works, the £88.5m scheme included concrete repairs to the underside of the viaduct and repainting of all the steelwork. The road has also been resurfaced, lighting has been upgraded and drainage has been improved.

Commenting, Graham Dakin, Project Manager at the Highways Agency, said: “The strengthening was vital to the future safety of the viaduct and the refurbishments will allow the thousands of people who travel over it every day to continue to use it in the decades to come. Lean ways of working, such as factory style production control and process improvements helped to reduce the programme and save over £1.5m on the total spend.”

The scheme received numerous awards and recognition for its industry leading key performance indicators. The team achieved record scores in its Project Performance Assessment (PPA), which covers safety, leadership and stakeholder management, and the project’s excellent health and safety record was rewarded with three Gold RoSPA Awards during the life of the contract.

Simon Ellison, the Costain Project Director for the scheme, attributed its success to excellent levels of engagement and communication across the project.

“Genuine collaboration and a ‘one team’ approach have underpinned everything we’ve undertaken. Everyone involved is rightly proud of what has been achieved,” said Simon.