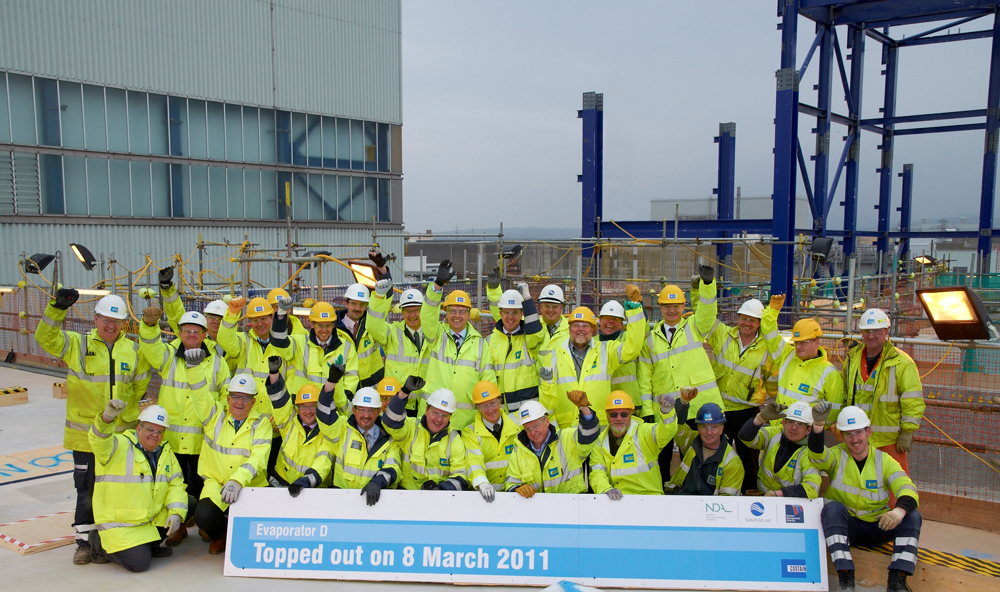 A major milestone has taken place on the UK’s largest current nuclear project with the topping out of the Evaporator D building, at Sellafield, on the northwest coast of England.

A Costain-Sellafield Ltd alliance will later this year complete the basic structure of the building, which is designed to reduce the volume of highly radioactive liquid waste at the Cumbria site.

It is a project which, for obvious reasons, requires the highest possible standards of build quality. Just designing and developing the initial construction safety case for the £397million project took a year; work on the foundations began in May 2009 and the project is not scheduled to be fully complete until summer 2014.

When in service, it will be used to reduce the quantities of Highly Active Liquor, a product of reprocessing of spent nuclear fuel.  The liquor is reduced in quantity by a factor of 20 by evaporation, to reduce the volume of highly active waste that will be vitrified in glass and stored on site.

The liquor will be evaporated inside a highly complex process plant designed by Costain Energy &amp; Process in the Manchester office. The Evaporator D process plant will add additional capacity to the current evaporators on the site and provide continuity in the reprocessing and decommissioning programme at Sellafield.

An idea of the scale of the project comes from the fact that over 350 Costain personnel – around 150 of them designers – are involved on it.

“We’ve been carrying out design work since 2007,” says Construction Director, Rob Phillips. “This is all about providing a solution to the customer. It’s a project where we carry out everything from front-end design, through procurement and construction to commissioning and it’s certainly the largest where we’re providing the total solution.”

For example, says Phillips, Costain buys the stainless steel for the evaporator module, sends it to a mill in Sweden to be turned into sheets, then upon its return oversees it being transformed into components for the modules. “Costain Energy &amp; Process has managed it right from the material stage. That way, we can guarantee its provenance.”

The 11 modules – the largest of which weighs 500 tonnes – are being constructed by a supply chain partner in Ellesmere Port, in Merseyside. These outsize loads are brought to Sellafield by barge and then transported across a beach, railway line, the River Ehen and public road to the site. A temporary bridge has been constructed over the Eden using four, 38-metre steel beams.

A further two beams, known as the Kursk Beams (after being originally fabricated to help raise the Russian nuclear submarine of that name that sank in 2000) are being used as part of a gantry in the Evaporator D building. This 35-metre-high gantry will be used to install the modules in the building.

The modules have to be completed to Build Level One – “The highest quality level you can get”, says Phillips. “Everything has to be 100% inspected.” Every weld, of which there are 2,000 in the evaporator module alone, needs to be radiographed.

The next 18 months should see completion of the civils side of the project, together with installation of the modules and around 70% of the mechanical, engineering and instrumentation equipment installed.