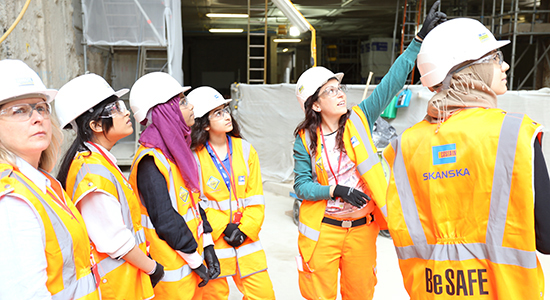 The Costain-Skanska JV team working on Crossrail’s Paddington station recently gave 15 female students from a secondary school in West London a tour of the project.

The aim of the visit was to encourage more women into the industry. This is a key element of Costain’s ‘Engineering Tomorrow’ strategy which, through greater diversity and inclusion, aims to identify, develop and implement innovative solutions to meet the UK’s major national infrastructure needs.

Organised by Jessica Ward, Social and Sustainability Manager for the project, the pupils from the Paddington Academy were given a tour by Ruth Fuller, Section Engineer, who gave the pupils an overview of the opportunities available to them in engineering.

Ruth said: “I really enjoyed meeting the local school students, who were all very enthusiastic and seemed to enjoy the site visit.”

An estimated 25 million people a year are expected to use the Crossrail station at Paddington when the new railway opens in 2018. One of London’s gateway stations, the new Crossrail station sits adjacent to grade one listed national railway station designed by Brunel in the 1800’s. Improvements at Paddington will create an integrated station with improved passenger experience and easy interchanges.

The young women received a presentation at the start of the day, followed by a tour and then some ‘speed’ networking. They also had a chance to ask lots of questions about future careers.

The students were surveyed before and after the visit and their answers showed how their perception of the industry had improved as a result of the tour.

Before the visit eight of the students felt that the industry would offer a career that would be of interest to them. By the end this had risen to 14. The remaining student realised she was scared of heights and was put off for this reason.

Before the visit nine of the 15 students thought that the industry was open to females. By the end all 15 felt that it was open to women.

Jenny Daykin, from the Paddington Academy, said: “Events like this make a massive difference on so many levels. The variety of jobs, backgrounds and personalities of the female Costain-Skanska employees meant that the students could also see where they themselves could fit within the industry.”

CSJV’s Jessica Ward, added: “It was a great success I am very pleased that the 15 young women now have a better appreciation of what we do and I am looking forward to more of these events.”