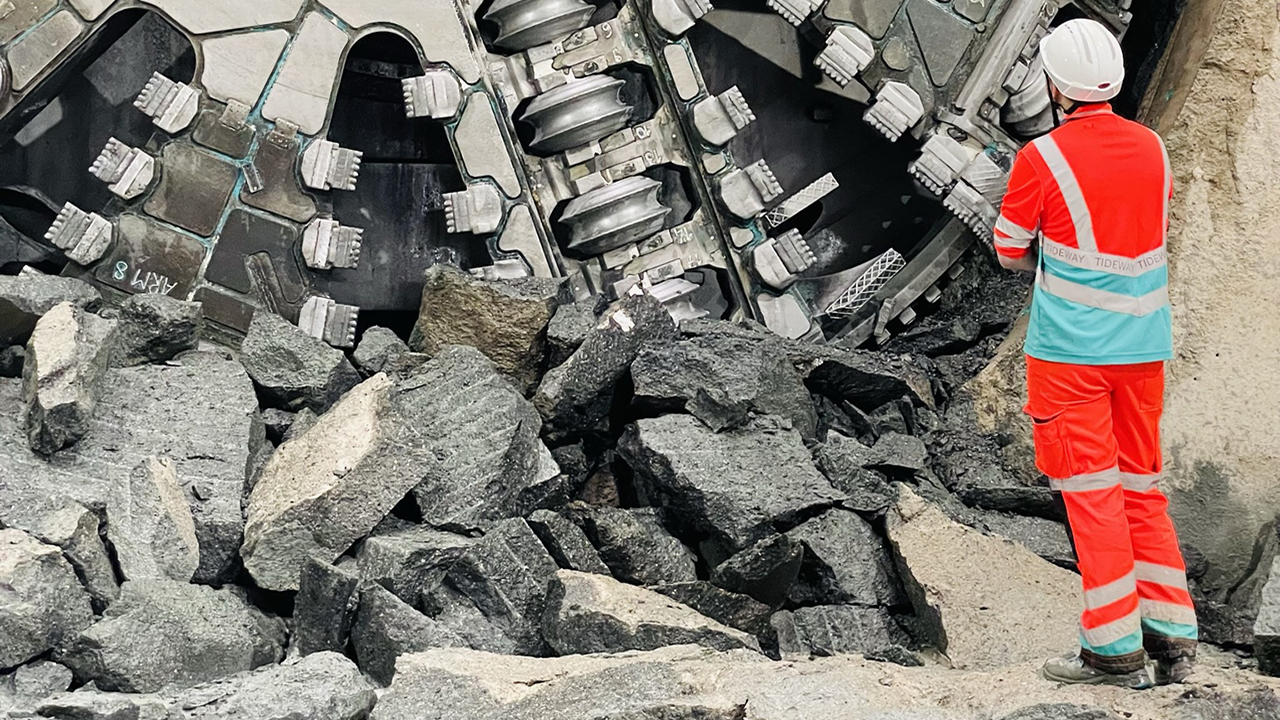 The 4.5km journey from Greenwich to Bermondsey, connect the super sewer tunnels.

TBM Annie began tunnelling from Greenwich last December 2020 and she broke into the shaft at Chambers Wharf on Tuesday (5th April), connecting the Greenwich tunnel to the Main Tunnel of the Tideway Scheme. This was ahead of the program set 16 months previously.

This major milestone now means that the only tunnelling work remaining on the super sewer project is the final few hundred meters of TBM Selina’s drive toward Abbey Mills Pumping Station which is planned to complete in the next few weeks. Selina will be the sixth TBM to finish tunnelling across Tideway.

In May 2021, the central area’s TBM, named Ursula, was lifted from the Chambers Wharf shaft after completing her role, tunnelling 7.6km from Battersea to Bermondsey. The 700 tonne TBM was lifted by a special 1,800 tonne marine floating crane, from the quay onto a barge for removal by river out of London.

Water sector director Gerard Shore commented: “This is a fantastic achievement and testament to the skills and expertise of the team involved. Tideway is the biggest infrastructure project undertaken by the UK water industry and.these significant milestones are part of a complex programme to give the capital city a safer and more environmentally sustainable water infrastructure.”

TBM Annie will now be removed from the shaft at Chambers Wharf, which in itself is an engineering feat. The shaft is 65m deep and 25m in diameter, linking three Tideway tunnels just a few meters from the south bank of the River Thames. The TBM is over 550Te and over 150m long and will need to be dismantled at the base of the shaft, before being lifted in pieces to the surface and loaded onto a barge. This will involve a team of over 50 mechanical fitters, electricians, labourers, slingers and specialist subcontractors working 24hrs a day for the next 10-12 weeks to dismantle the TBM into manageable pieces. The barges will then transport the TBM back to Germany where it will be refurbished and then reused in other projects.

Robert Margariti-Smith, Tunnel Manager said, “Everyone has continued to worked together to deliver this large milestone on the project. The tunnelling team, both on surface and underground, has been physically delivering the work day and night over the last 16 months – and for the most part unseen in this subterranean tunnelling world. It’s the collective work of many individuals and disciplines, all driving towards this common end goal that has been fantastic to be part of.”