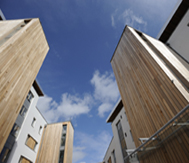 The £19million project on the first phase of Worcester University's new City Campus involved the construction of two new student residences. The Costain team also carried out repairs to Grade II listed buildings that were part of the former Worcester Royal Infirmary.

The pre-cast concrete residences provide high-quality, en-suite accommodation for 178 students. Each of the four and six-storey blocks is fitted with solar panels to heat water, and has a rainwater harvesting system.&nbsp;

Work on the listed Georgian and Victorian buildings - including one where the first British Medical Association (BMA) meeting was held in 1832 - involved internal strengthening, the cleaning and repair of masonry, and the re-roofing of the main building.

"The railway was next to the gable ends of the building and we had to make certain our tower crane didn't oversail the railway line. We also had to ensure we had all the right permits from Network Rail when it came to erecting and dismantling the crane."

Nevertheless the 13-month job came in right on time and was completed
on 7 September. Students moved into their new home twelve days later.